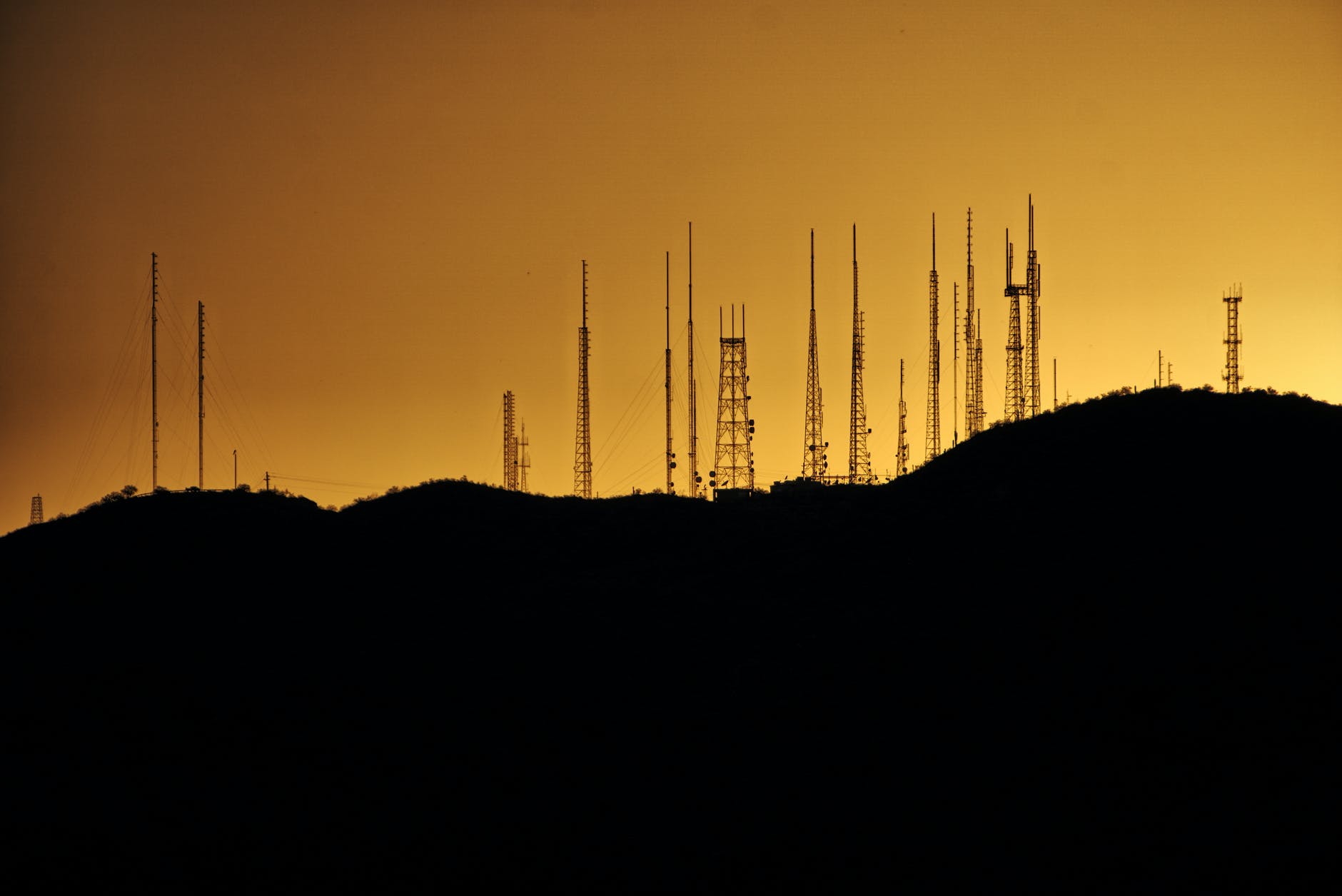 Photo by Troy Squillaci on Pexels.com

Of course we do. Because when we’re connected, we can realize our full potential.

Sorry. Does that sound like Facebook’s latest ad campaign, designed to apologize for yet another insane privacy violation? I didn’t mean to.

But in a way, it rings true: as a society, we have pretty much agreed that being more connected is the Way It Should Be. Individually, we might rebel against this idea, but our collective behavior tells the real story. The evidence:

Thankfully, the telecom industry is on hand to right this wrong.

The incursion of cell towers and 4G connections in the backcountry is probably most well-documented in our beloved “natural cathedrals,” where we can stand in quiet contemplation of “America’s best idea.” That is, of course, until the tourist behind you gives you a quick elbow to the ribs because its his turn to take a picture now, thank you very much.

I’m talking about our national parks.

Anyone who’s been to one of the busiest of our national parks is probably not surprised that these locations would be the first to connect. In the summer months, the perfectly paved roads and manicured trails are crawling with tourists. Between the traffic, the lodges, and the football-field sized parking lots, a place like Yellowstone can feel more like a Disney theme park than a wilderness getaway. The ironic thing is that while national parks have among the strictest protections against commercial interests like logging and mining, the National Park Service has embraced development in the name of recreation instead.

The most recent addition to this growing list of development is cell towers. Grand Teton National Park has the most recent, and most audacious plan to install new cell towers and fiber optic cable, according to High Country News. But other parks aren’t far behind. Those with recent cell tower developments include the Grand Canyon, Sequoia, Yellowstone, and Yosemite. There seems to be broad agreement between park managers, Department of Interior officials and the Trump administration that more towers, with less red tape for their installation, is the way to go (the Trump team has had many ideas for the Park Service, including slashing its budget, installing wi-fi and food delivery services at campgrounds, and using parks for political events). Most tellingly, a 2019 internal investigation into the Park Service found that it had failed to track cell installations or even accurately charge telecom companies for the right to do so. No one really knows how many cell towers have been built in our national parks, and there’s a good chance that taxpayers have subsidized their construction.

In short, the busiest parks in the nation are either already blanketed with cell service and Wi-Fi, or will be soon. And while this is unfortunate, in a way it feels inevitable. The national parks have always been the sacrificial beast of the backcountry world. They funnel millions of visitors along crowded roads to iconic viewpoints and busy campgrounds, which in turn, leaves millions of acres of wilderness left to be explored by anyone who doesn’t think this sounds like fun.

However, the proliferation of cell towers doesn’t stop in the parks. I live in Idaho, where there are no national parks in existence, and the issue has come to a head. Why? Because AT&T plans to build a new cell tower in the Sawtooth Valley near Stanley. The Sawtooth Valley, and the imposing Sawtooth Range overlooking it, is probably the closest thing Idaho has to a national park. But the valley itself isn’t protected like a national park is, which makes the debate over the new tower quite interesting indeed. Here’s a few reasons why:

Often, we talk about public land like it’s this collection of monolithic forests and parks that are one hundred percent protected in every way. In some cases, this is true. Our highest designations of protection, like designated Wilderness, are essentially permanent and untouchable, barring Congressional action. But in most cases, the outdoor places we love are a mish-mash of public and private lands, with a dizzying number of rules and regulations to go with them. Sticking with our Sawtooth Valley example, this becomes quickly apparent. At the federal level, you’re dealing, first, with Forest Service and Bureau of Land Management property. The Forest Service land is then divided further into national forest (your standard-bearer), as well as the Sawtooth National Recreation Area. This designation instructs the Forest Service to prioritize recreation over other uses, like logging. Within the Sawtooth National Recreation Area, there are two designated Wilderness areas. Wilderness areas are under an even stricter protection level, which completely bars development of any kind, as well as any motorized users – no roads, no ATVs, no bicycles.

And that’s just the federal land. There’s also plenty of private land in the Sawtooth Valley, where ranches and homesteads abut the forests. On top of that, there are small parcels of state land, managed by the Idaho Department of Lands, tucked in between everything else. It’s one of these small state parcels that is the potential home for the AT&T tower, and that has enormous consequences for what might happen.

The Forest Service has a stated mission to “sustain the health, diversity, and productivity of the nation’s forests and grasslands to meet the needs of present and future generations.” Forest Service managers have budgets to balance, and benchmarks to meet for timber sales and recreation fees, but there’s no imperative to growth revenue for its own sake. The overarching goal is forest health, not a profit margin. There are cell towers on national forests, as well as ski resorts, commercial lodges, guiding outfits, and mining operations. There are numerous examples of controversial development projects on national forests, but my point here is that forest managers have a broad range of options to allow or deny these projects. Their hand is not usually forced.

The Idaho Department of Lands also has a mission statement. It goes like this: “To professionally and prudently manage Idaho’s endowment assets to maximize long-term financial returns to public schools and other trust beneficiaries and to provide professional assistance to the citizens of Idaho to use, protect and sustain their natural resources.”

These lands managed by the Idaho Department of Lands are known as endowment lands, and the main goal is to make money. This money, in turns, funds the public schools of Idaho. It’s a noble cause, but linking the profit-making abilities of public lands to education dollars invariably means that managers’ hands are tied when they are approached with a project that could contribute to funding. After all, every funding dollar that is not being provided by these endowment lands must be made up for, either through tax increases or education budget cuts.

This might be an obvious one, but it bears a mention. While the telecom industry receives plenty of public assistance, the companies are privately held, and they are in the business of increasing service for their customers, not for the general population. In cities and developed areas, this can work out well, because it gives people more options, and the competition can, in theory, lower prices. However, when it comes to cell towers that serve remote areas, it doesn’t work so well. Consider, for example, that Stanley already has a cell phone tower. One tower might not seem like much, but Stanley is officially home to fewer than 100 people. The tower was constructed by the non-profit Custer Telephone Cooperative, with input from local residents and local officials. It’s 100 feet tall and almost entirely obscured by trees. I’ve driven past it countless times and have never noticed it. And in Stanley, there’s 4G cell service.

The proposed AT&T tower, in contrast, is opposed by all the local players in the game — the county commissioners, the Sawtooth Society, the mayor of Stanley, and local search and rescue volunteers. In fact, no one has spoken up in support of the new tower’s construction. It’s not hard to see why. The town already has cell service. Custer Telephone offered to allow AT&T to install their technology on the existing tower, in effect not altering the landscape at all. AT&T has so far refused the offer, instead proposing an adjacent tower that would be twice as tall.

The fact that AT&T still plans to go ahead with the construction, over the objections of the people whom they are supposedly providing service, proves that this situation is a problem of profit-chasing rather than an issue of whether to support development. After all, the residents of Stanley already decided to construct a cell tower — they don’t want a taller, unnecessary addition.

…thanks to 5G. The technology might not have been the cause of COVID-19, but there’s no question that it is going to drastically alter the way we see cell towers. Basically, the new signals transmit at a higher frequency, and cannot travel nearly as far as current cell signals– in fact, they fail in as little as 100 meters! In effect, this means a smaller cell tower on nearly every city block. This means that a nationwide rollout of the new technology would require anywhere from 250,000 to one million new cell towers. These could be placed in a variety of places – on street lights, traffic signs, and even below the street under manhole covers.

Someday soon, I’m sure that means they will be disguised as trees along roads in our national parks. Pretty soon, the “eyesore” argument against cell towers in our natural spaces will be obsolete, leaving those of us against their installation clinging to a simple philosophy: In this world of Facebook and Google and the NSA and Big Data and location tracking and facial recognition and constant surveillance… shouldn’t there still be a way for us to disconnect? To disappear?