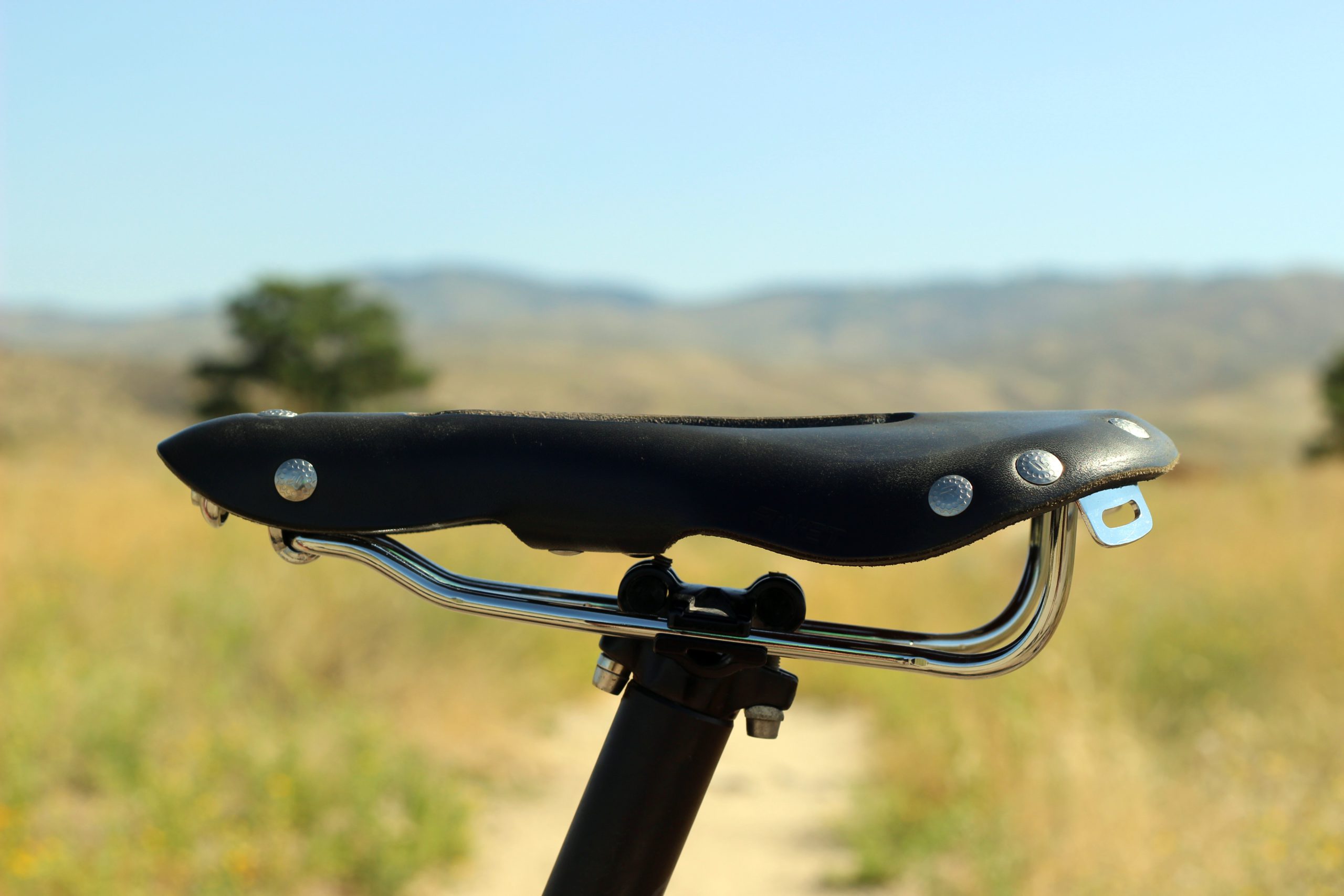 I just posted a pointless Brooks B17 review, and if you read that you might think that I’m a full on Brooks acolyte, never to ride on another bike saddle again. At one point, I thought that might be the case, and it’s true, I do find the B17 very comfortable.

But one thing I found recently is that when I’m riding aggressively, the width of the B17 gets in the way. If I’m on a long and fast ride, it’s uncomfortable. With plans for more bike tours and bike camping trips in the future, I thought it might be time to try another saddle.

I suppose a true Brooks fanboy would spring for a Swift or a Swallow, two of Brooks’ narrower and racier models. But I felt an urge to try something different (to the extent that two retro-style leather bike saddles can truly be different) and ordered a Rivet Diablo. It’s available for $150 with cro-mo rails, or with titanium rails for another $100. I got the cro-mo. It’s all leather, has a nice cut-out (which I’ve never tried before), is coated for extra waterproofing, and most importantly, is a full 20 mm narrower that the B17.

This time, I also decided to base my new saddle’s color on my current bike’s color scheme, and bought a black one. I’m learning.

First, a little about the company: Rivet Cycleworks is a small U.S. company that focuses on gear for seriously long rides. Debra Banks, the owner, is a randonneur who regularly rides stupid long distances, and I figured if anyone knows what makes a bike saddle comfortable, she might be the one. So I got one, and now that I’ve been riding it most of the summer, I’ll talk about it a bit.

Like with other leather saddles, the first thing I noticed out of the box was it’s stiffness. The idea here is that the saddle will break-in over time — if it was comfy out of the box, within a few months it would be too soft.

I was an immediate fan of the styling, which is perhaps a bit more modern than a Brooks is. I’ve swapped it between my Soma Wolverine and my full-squish mountain bike, mostly just to get more miles on it, and while it fits the Soma like a glove, it manages to look okay on a modern, hyrdo-formed aluminium bike as well. I’m a big fan in particular of the upturned nose on the Diablo, which is unique and makes it stand out from other leather offerings.

The Rivet Diablo is constructed of a single piece of high-quality leather with a waterproof coating. The underside (the suede side) is bonded to a synthetic waterproof layer as well, which seems to grant even more protection from spray from puddles and wet roads. The thing about all this waterproofing is that the leather feels especially thick out of the box, and because of all that waterproofing, the leather isn’t going to soak up leather conditioner, if you’re after a quicker break-in period. In fact, Rivet says the only part of the saddle that requires treatment is the edges, where there’s no waterproof layer. That means there’s no good way to speed up the process besides riding more. There are worse problems to have, though, right?

The Diablo is definitely narrow, especially through the midsection, where your legs are most likely to rub against a wider saddle. That narrow midsection is held together on the underside by a metal plate and four rivets, which seems sturdy.

The cro-mo rails are shiny, and so far haven’t been marred by the seatpost clamp. They offer 90mm rails, which is longer than most offerings from Brooks and other similar saddles, though Selle Anatomicas are 100mm. In general, a setback post is a good idea with these leather saddles (ignore all the pictures of my zero-setback, please).

Another ride upgrade from some other leather saddles is the more modern tension bolt, which is adjustable with an allen key rather than a wrench. It’s also easier to access than the bolt on other saddles (like the B17) which makes micro-adjustments easier.

At this point, I’ve put somewhere between 500 and 1,000 miles on the Diablo (I’m not the most diligent Strava user) and here are my impressions of it’s actual comfort, on the bike.

It’s not fully broken in yet. I can tell it has more to give, which isn’t unusual, but in my estimation puts it pretty firmly in the “slow” spectrum on the break-in equlibrium.

It’s very narrow. It feels racy and fast. My old Brooks B17 almost feels like an actual seat, which is super comfortable for long rides and multi-day tours, but it doesn’t really compel you to push yourself. In comparison, something about the Diablo seems more at ease when I’m taking corners, getting out of the saddle, or getting my weight back over the rear wheel. It feels like a real jack-of-all-trades saddle, that’s good for long rides and aggressive ones. That said, the B17 feels far more molded to my sit bones than the Diablo does so far, but I’m confident the Diablo will continue to soften up.

For long tours, I think the Diablo might wind up feeling too narrow. I’d like to split the difference between this and the B17, and luckily, Rivet offers two more models that fall in that range, and both feature the same narrow mid-section that I like so much on the Diablo.

Luckily, Rivet has a 365-day return or exchange policy, and very clearly advertises the dimensions of their saddles. It’s nice to see a company offering a product line based on measurable differences like width and length, rather than abstract terms like “touring” or “racing” models. If I decide I need to spring for a different model, it will be no hassle at all.

I’ll update this when I’ve got another 1,000 miles of the Diablo.

LeMond bikes are back with a surprising new look