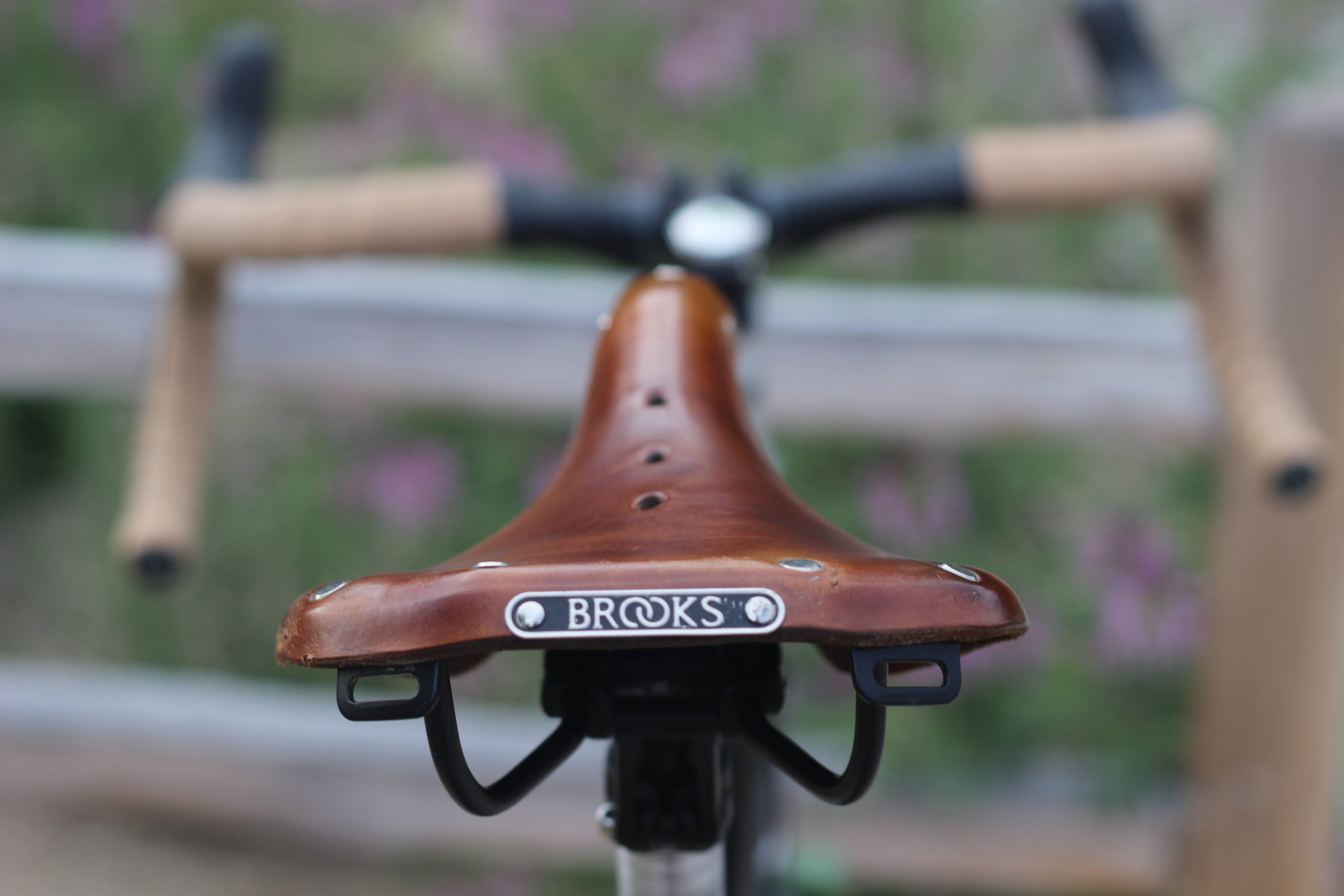 In 2020, is there any good reason to write a review of the venerable Brooks B-17 bike saddle? I’ll cast my vote: no. Everyone is familiar with this solid leather piece of cycling history. It’s been in production since the 1890s, after all. No one needs to review it, because opinions have already been formed. You either love it or hate it. A review is beyond pointless.

So anyway, here’s my review of the Brooks B17 bike saddle.

If you still don’t know, here’s what a Brooks is. It’s a piece of thick leather that’s draped over some metal rails and bent into the shape of a bike seat. When you first put it on your bike, it’s not very comfortable. After riding for 100 miles, it still isn’t. 500 is the magic number, give or take. That’s when that thick piece of leather stretches out and conforms to your derriere, offering a hammock-like ride for your backside.

I got my first, and only, Brooks saddle when I was about 17 years old. I saved up most of my money from a job at the Texas Roadhouse washing dishes, and bought a 2005 LeMond Reno, and a honey brown B-17. That LeMond was a pretty bike, with a Lucky Strike-esque red, white and black theme, but I had bigger plans for the Brooks. Everyone told me that it would last forever, and in my mind I pictured a bike in my future — a beautiful bike, with cream paint, navy blue accents, silver components, and my honey brown saddle with matching leather bar tape. One day. When I was 17, that dream bike was a fixie. Today, it’s probably a custom geo Waterford built to accommodate my long-ass legs. It’s still imaginary, and the color scheme hasn’t changed.

12 years later, Honey B has been on a lot of different bikes, none of which have had a matching color scheme. I value sale prices too much, and can’t stick to a theme.

I haven’t always used my Brooks saddle. There were a couple years when it sat in my Mom’s garage, because I had sold the LeMond and bought a Kona mountain bike and used the stock saddle. But for several years before that I mistreated it badly, leaving it out in the snow and rain, and never using a seat cover. At one point, when I was a broke college student, I considered buying some proofhide, but didn’t. I probably bought beer instead.

It’s back on a bike now though. And despite the way I’ve treated it, it’s still in its golden years. It sagged a bit, but a few turns of the tightening nut at the front, and it’s good as new, probably a little bit firmer than I’d like, even. Before mounting it on my new Soma Wolverine build, I put some leather preserver on the top and bottom, and let it soak in on a hot summer day. I’m finally starting to treat it with love.

Aha! Six paragraphs in and I think I’ve finally gotten to my point. Everyone always says you need to treat your Brooks B-17 well. “Just don’t get that thing wet, or you’ll have wasted all your money,” they say. After all, Brooks even makes a synthetic saddle that’s more waterproof and therefore a better option for all-season riding.

My experience doesn’t agree. My experience is that I’ve ignored, mistreated, and abused my poor Brooks saddle and it’s still lasted over a decade. I don’t know how many more rainstorms and rainy rides without fenders I’ll have to do before I feel the need to tighten that front nut all the way down, but it must be in the hundreds. It’s certainly not anytime soon.

So there’s my review. If you don’t like the saddle you have now, try a Brooks. Ride it a lot. Soak it in hot water to make it break in faster. Or don’t. Always use a saddle cover. Or don’t bother. Use some sort of oil to protect the leather. That’s the one that I really recommend. These leather saddles can handle a lot, but they sure do love to be oiled. Obenauf’s is great – it’s designed for leather firefighting boots, which go through a lot more hardship than a bike saddle.

Whatever you do, I recommend choosing your saddle’s color based on your current bike, not some distant dream. But if you’re willing to wait, the Brooks will probably still be kicking when you do finally build that perfect bike, so, I don’t know… maybe just go for it.

LeMond bikes are back with a surprising new look